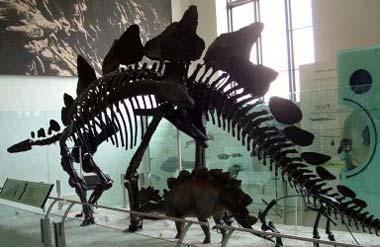 Stegosaurus was designated the official state fossil of Colorado in 1982. Colorado is where the very first stegosaurus fossil was found in 1876. All State Fossils

The Denver Museum of Nature & Science displays a stegosaurus fossil skeleton that was discovered by Canon City High School students and teacher.

Stegosaurus (which means "roofed lizard" or "covered lizard") was a large herbivorous dinosaur that lived in the area now called Colorado 150 million years ago (mid-Jurassic to the late Cretaceous period). An incredibly successful dinosaur that survived for tens of millions of years; fossils of stegosaurus have been found in western United States, Europe, Africa, and Asia.

In addition to the distinctive bony plates that formed a defensive ridge along the dinosaur's back and tail, stegosaurus had a unique and deadly defense against predators with its spiked tail, which it could apparently wield with great dexterity and accuracy. Besides providing armor, the plates are also thought to have possibly helped with regulating body temperature, and could have been used as a display (turning colors as a warning to predators and as part of its mating ritual). Stegosaurus; photo by Travis on Flickr (noncommercial use permitted with attribution).