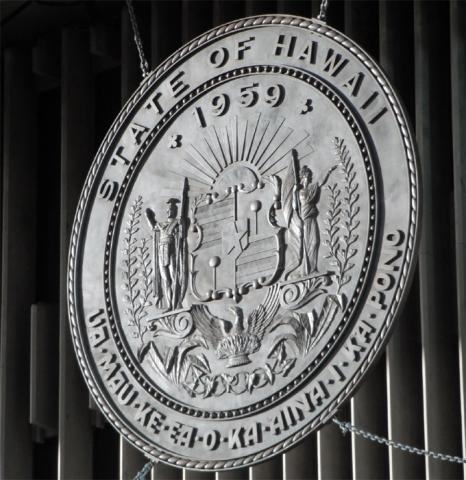 A representation of Hawaii's great seal hangs over the main entrance to the Hawaii State Capitol; photo by Bill Sodeman on Flickr (use permitted with attribution / share alike).

The great seal of Hawaii features the state motto on the lower outer circle; "UA MAU KE EA O KA 'ĀINA I KA PONO" (The life of the land is perpetuated in righteousness), and STATE OF HAWAII above. The inner circle has 1959 at the top above a rising sun (in 1959 Hawaii was admitted to the United States of America as the 50th state). All State Seals

The seal features two bearers holding the state shield. Kamehameha the Great stands to the left (he unified the Hawaiian Islands into a single united kingdom). On the right of the shield, the goddess of liberty holds Ka Hae Hawai'i (the flag of Hawaii). Below the shield is the image of a phoenix rising up from a wreath of eight taro leaves (the official state plant of Hawai'i), banana foliage and maidenhair fern.