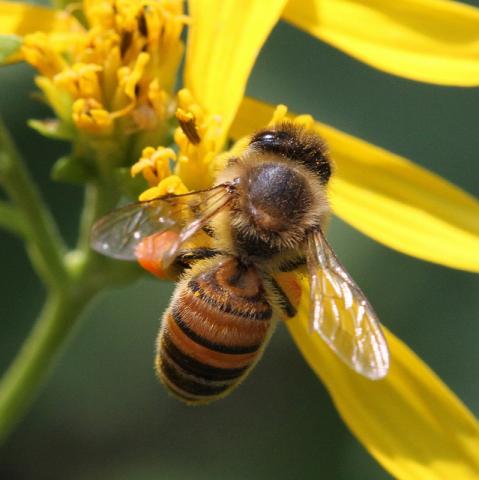 Missouri designated the honeybee (Apis mellifera) as the official state insect in 1985. Bee pollination is critical to plant and human survival; beeswax and honey are just surplus gifts from this tiny wonder of nature. Honeybees are common in Misssouri; they are also cultivated by beekeepers for honey production and pollination of crops.

The plant world expends a lot of energy attracting bees and other insects with brilliantly colored flowers and sweet nectar (nectar is produced solely to attract pollinating insects). The honeybee is recognized as a state symbol in seventeen states, primarily because honeybees play such an important role in agriculture.

The first bees appear in the fossil record dating 40 million years ago and the honeybee has remained physically and socially unchanged for 30 million years. Probably originating in tropical Africa, they were brought to the New World with the first Spanish and English colonists, quickly escaping to the wild and eventually populating the entire western hemisphere. American Indians called the honeybee "white man's flies.