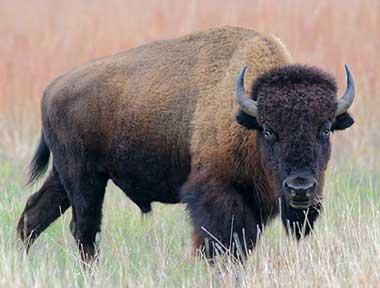 Oklahoma has adopted three other mammal symbols; a furbearer animal in 1989, a game animal in 1990, and a flying mammal in 2006. All State Mammals

The buffalo, or American bison (Bison bison) is an integral part of American history; no other wild animal has played such a significant role in human affairs. The Native American tribes of the Great Plains relied on buffalo for food, shelter, clothing, and as a powerful spiritual symbol.

A bull buffalo can weigh up to 2000 pounds and stand 6 foot tall at the shoulder. Buffalo once roamed the American prairie by the tens of millions and provided a way of life for the Plains Indians. But European settlers hunted buffalo to the brink of extinction - it's estimated that between 300 - 500 animals remained when the federal government passed stricter game laws in 1889.